In 2016 I went hitchhiking alone through Romania. I left Brasov in good company in the back of an old Dacia. I got all the way to my bus stop at 10pm, but the bus never came. After weighing up my options I caught a taxi with the old cab available. The driver, Vasil, spoke broken English, hated homosexuals (he told me several times), and loved the song ‘Bad Boys’ - he had an entire CD where every song was ‘Bad Boys’. Eventually he refused to take me any further. I protested as I had no clue where I was - the dirt road had almost disappeared and there was no light whatsoever. But it was to no avail. I wandered through the tiny village trying desperately to find somewhere to take refuge for the night. Mangy dogs skulked around growling at me, so I found an old courtyard with a mesh gate, pulling it shut behind me. With my last 6% battery I used my phone light to put on all my clothes I had in my pack - it was going to be a cold night. I propped myself up against a rock, the hair on my arms stood on end. I could hear wolves howling in the nearby hills. The next morning I was awoken by a shepherd herding goats through the town. I looked around and realised the courtyard was actually a cemetery. I had spent the night in a graveyard in Transylvania. 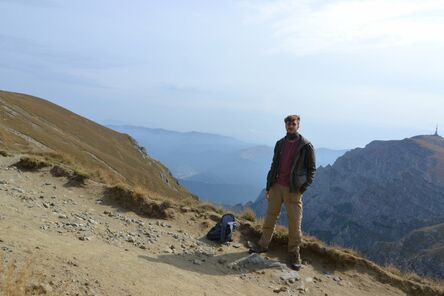