A TYPICAL DAY IN INDIA

After spending a day overheated and discombobulated and walking around the Taj Mahal with a French couple I met at my hostel, I headed out on an overnight bus to Varanasi.

I arrived at my next hostel sticky, pretty smelly and hoping to catch up on lost sleep but was quickly caught up by an enthusiastic American wanting to show me around his favourite places he’d seen so far.

Heading out into the over-crowded and bustling streets, I was being given a whistle stop tour of the best places to eat and sights to see. We arrived about 40 minutes later at a small cafe that offered a “fresh” raw vegan cuisine. Half asleep and a little delirious, I ate a cold and uncooked salad which tasted bliss. Well... I’m sure you can guess I was then treated to the delights of Delhi Belly for the next few weeks and a toilet soon became my best friend! 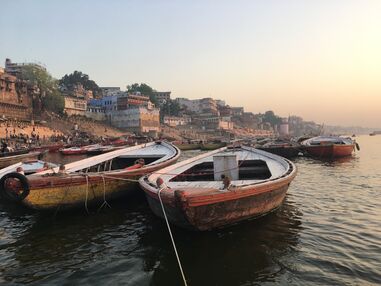