THE OPAQUEST AND UNCONVENTIONAL OF WAYS

We are both haggard from WHAT we'VE left behind temporarily for this trip. Our monotonous lives riddled with the confinements of work and the banality of our own private affairs of Western civilisation. Hers in Berlin and mine in Melbourne. But we met in the hustle and bustle of Ho Chi Minh city, where our internal voices are drawn out of us as we find distractions and excitement in the nuances and novelty of an unfamiliar world that is wrapped around us.

My heart beats in the rhythm of this vibrant and ostensibly chaotic city, fast and joyous in a trance. This city, home to almost nine million souls, souls appearing dishevelled and kempt, frantic and tranquil like working ants and bees. The people of Ho Chi Minh get pumped in and out the vessels and veins through to the heart that never dies from exhaustion.  This city is like a whore that never gets its deep sleep, for which a state of bliss cannot be found, she lays half-awake for us to play and pollute.

It’s like mayhem, but not quite so. Unlike the structured nature of Melbourne and Berlin imbued with law and order which is ingrained and dictates my being, Ho Chi Minh is a beast of a city that has its own way of being efficient in the opaquest and unconventional of ways. So little pedestrian friendly spaces and so much influx of motor vehicles that take over the walking paths in the heat of dreadful and heavy traffic. It may seem like a callous place to be but there is so much innocence in this city. Sharing a similar population density as Mexico City, Ho Chi Minh on the contrary is tainted with pride born out of its history of overcoming the French colonialism and American imperialism.

In the morning, Ho Chi Minh rises with such ambition, not with the ego of a Starbucks drinking liberal capitalist, but the ambition of a child who seeks pleasure in collective play. For it takes the presence of everyone in a party to be a fruitful event and no child wants to play alone. To a foreigner who’s travelled to the periphery of the globe, Ho Chi Minh a place I had anticipated to witness gross inequality as I have seen in Mexico City, didn’t leave people on the streets begging or individuals feeling alienated by their precarious material circumstance. There was neither the fear one would feel in a highly saturated city and the atomisation of social connection I feel at home in one of the most liveable cities.

I’m writing this back at home in Melbourne amidst the pandemic. And I wonder how Ho Chi Minh is faring. But more importantly, how did she sleep in lockdown. I still hear her, the ferocious honks, the roaring of never ending engine of motorcycles and cars made long before I was born, the melody of the Vietnamese language and the sweetness of giggles leaving the lips of shop vendors and shoppers. Almost nine million people in one city and more than ninety-five million people living in Vietnam, how did they overcome COVID-19? I doubt it was easy but it highlights something about the West, at least in the majority, that the social fabric of our developed world is tenuous and laden with such individualist sentiment that sees collaboration and collectivism as threats to our liberal values. But saving lives and the well-being of people are the imperatives to a prosperous civilisation. 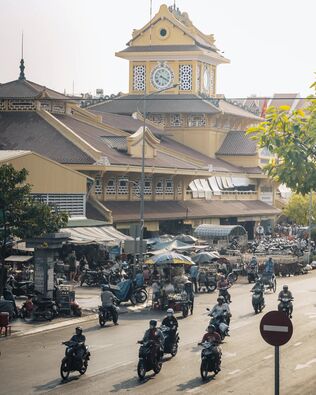