Finding the word ‘Timbuktu’ in my atlas was a revelation. I’d thought it was a mythical city. On my discovery, aged 12, I determined that one day I would go there. Never mind that it seemed utterly inaccessible, nestled in the southern Sahara Desert. Somehow, I would find Timbuktu.

From Mali’s capital, Bamako, we travelled by road via Ségou to Djenné. We admired the Great Mosque, the world’s largest dried earth building, and enjoyed the vibrant Monday market selling everything a Malian household could need. A spectacle of colour, we found dried gourds, woven baskets, gaudy plastic bowls and metal cooking pots alongside brooms made from leaves. Racks of patterned fabrics nestled against piles of every grain, spice, fruit and vegetable that Mali can offer.

We stuffed ourselves with delicious fried plantain and sugared dough balls from the market stalls, not worrying too much that the oil used for frying them looked as if it had been drained from the engine of an old bus. We stocked up on fruit.

On the road again, we headed for Mopti where the real journey began. Pushing our way through bustling crowds we found our home for the next three days waiting at the water’s edge with its crew of three and our cook. We chugged off up the Niger in our pinasse, one among countless river craft: motorized barges piled with goods, sailing boats with voluminous patched sails, pirogues shunted by pole through the shallow waters, and the small boats of the Bozo fishermen. We passed villages where life took place at the river’s edge. Women washed clothes or pots and pans, young children played and swam, older ones led cattle to the water and everyone, from children to men crewing their boats, waved and greeted us.

As the sun began to sink, our crew steered the pinasse to the bank of the river to moor it for the night. Down the precariously narrow gangplank we carried our tents, folding chairs, cooking utensils, oil lamps and, not to be forgotten, the shovel! (‘What did you do about a loo?’ I would later be asked by people who couldn’t understand the concept of wild camping. ‘A handy dune and a shovel’. I would reply.) By the time we’d got our tents up the sun had disappeared, leaving a warm, velvety darkness. Our cook produced a delicious meal from a few basic ingredients, followed by fresh fruit we had bought at one of the villages.

A billion stars shone overhead and I saw the bright arc of a shooting star. I fell asleep to the insistent croaking of bullfrogs.

Next day on the river was much the same but there wasn’t a moment of boredom. Life on the banks of the Niger is vibrant, intense and ever changing. On board we sat three abreast with a plank table in front of us (one converting to the gangplank, the others to our campsite dining table) and here the only way to the loo - no shovel required - was an inelegant scramble on to the edge of the boat and shuffling along the six inch wide plank to the stern while hanging on to the roof for all you were worth to avoid a dip in the water.

Cook bought supper’s main ingredient - two large Capitaine fish from a passing fisherman. A few hours later he produced another delectable evening meal as we pitched our tents for a second night beneath the eerie light of the enormous pale moon.

By mid-afternoon of our third day on the Niger, the desert encroached as we were now in the Sahel. We’d seen hippos in the river and now saw camels on the shore.

Disembarking was a transformation from the quiet lull of river travel to the bustle of the busy little port of Korioume. Transferring to battered Land Cruisers we drove through desert scrub. As buildings came into view, we met three haughty Tuareg, immaculately dressed in sky-blue robes, riding their camels at a smart gallop. We had arrived in Timbuktu.

Making my way down the main street, its sand pitted with tyre tracks and a thousand footprints that would be obliterated by morning, Timbuktu, fabled city of 333 saints, was everything I’d dreamed of. Not so grand as colonial Ségou - not as splendid as Djenné - not as colourful as Mopti - but simply Timbuktu, a place of legend and the destination of my 40-year-old dream. 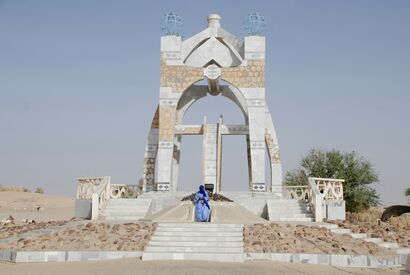