A SHORT STORY ABOUT GORGEOUS HUMANS

I grew up in 90’s Poland, where even if you were upper middle class you struggled for money a little bit, and ‘never pick up a hitch hiker’ hadn’t yet become one of the most basic things to teach your children. This is why it was obvious to me that the best way to see the world on a low budget was to stick out my thumb and wait.

I’ve travelled all across Europe and the US, mainly alone (although the first couple of journeys I was accompanied by friends). That meant that everyone I met on my way just had to ask, ‘aren’t you afraid to travel like this – especially as a woman?’. The truth is I’ve always been a little bit afraid, but I was also brave, and I trusted that most people were good. Here are two stories of men who had nothing but wanted to share everything:

In Lubbock, Texas, I was Couch Surfing with a guy called Schmoo (who, to me, represented everything good about America). One night we took some acid (that I was gifted in Austin) and we went out to meet Schmoo’s friends at a bar. 40 minutes passed and I started to feel very anxious and dizzy (you know that moment when your heart speeds up and your pupils start dilating). I thought it was best to step out, to escape the sensory overload of a crowded bar.

I sat on a curb and held my head in my hands, thinking that’d help me calm down. A homeless man approached me. At first, I thought ‘this is a really bad time to ask for money’ but quickly I regretted that thought, as he offered me water, his blanket, and some food. He came up to me only to take care of me, even though clearly, we, the society, weren’t taking care of him. The man stayed with me until I got better and then we chatted until Schmoo came out to join me.

Later that month I was leaving Raton, New Mexico, for Santa Fe. I wanted to take a picture of the road before I stuck my thumb out, but he appeared out of nowhere saying I could not take pictures of him (I didn’t even notice he was in the shot). His name was Digger, and he was ‘the king of the hobos’. He worked as a source for the local police and was homeless by choice – by not paying rent he could afford his daughter’s college. He was worried about me hitching alone, so he gave me a nice knife with a flint and offered I could sleep in his ditch, if I didn’t manage to get a ride. He said he’d watch over me and make sure no one hurts me. He also taught me how to recognize a KGB agent and then gave me his phone number ‘in case I needed legal advice’.

How can you be afraid to travel with strangers, if the strangers you meet are pure gold? 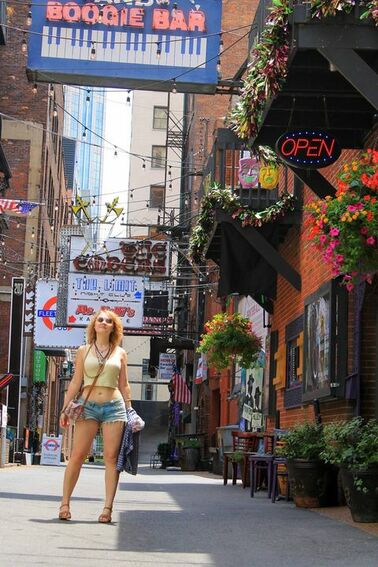